Wagga Narrandera and back to Tumut

After doing the oil and lube for Dora I headed to Narrandera via Wagga to catch up with the fishing club on Thursday night for the raffle.  I camped on the forecourt of Peter's Printing as usual.  The boys have taken the biscuits and cheese we started about 9 years ago to a new height.  Check the photo. 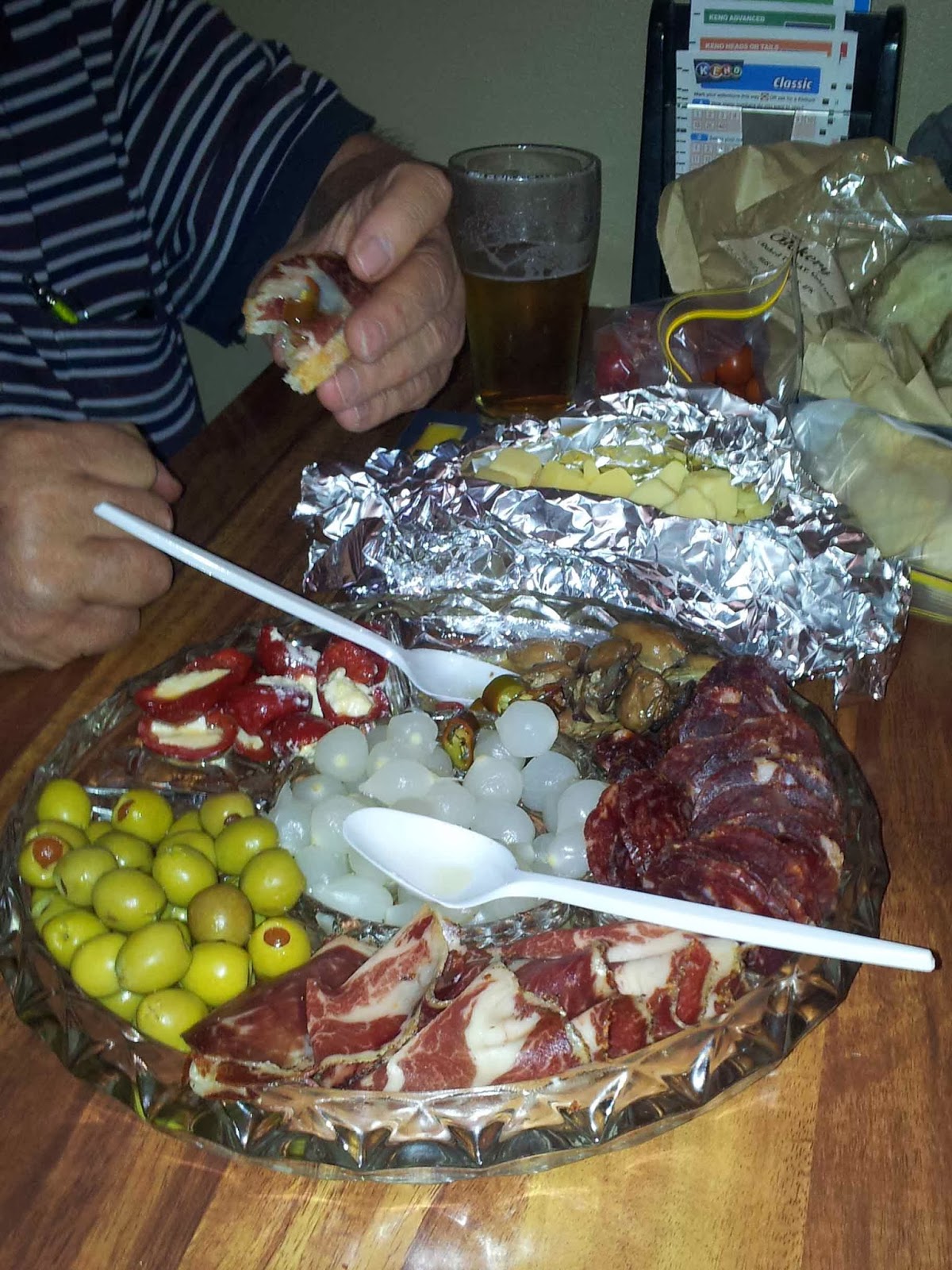 I cleaned up a bit in the containers on the block and stayed one night there before heading back to Wagga for the weekend.  Monday morning I picked up the air filter ordered from Int Parts and headed back to Tumut to do the auto transmission service with Brad.  Spend two more nights on the Tumut river, nice. 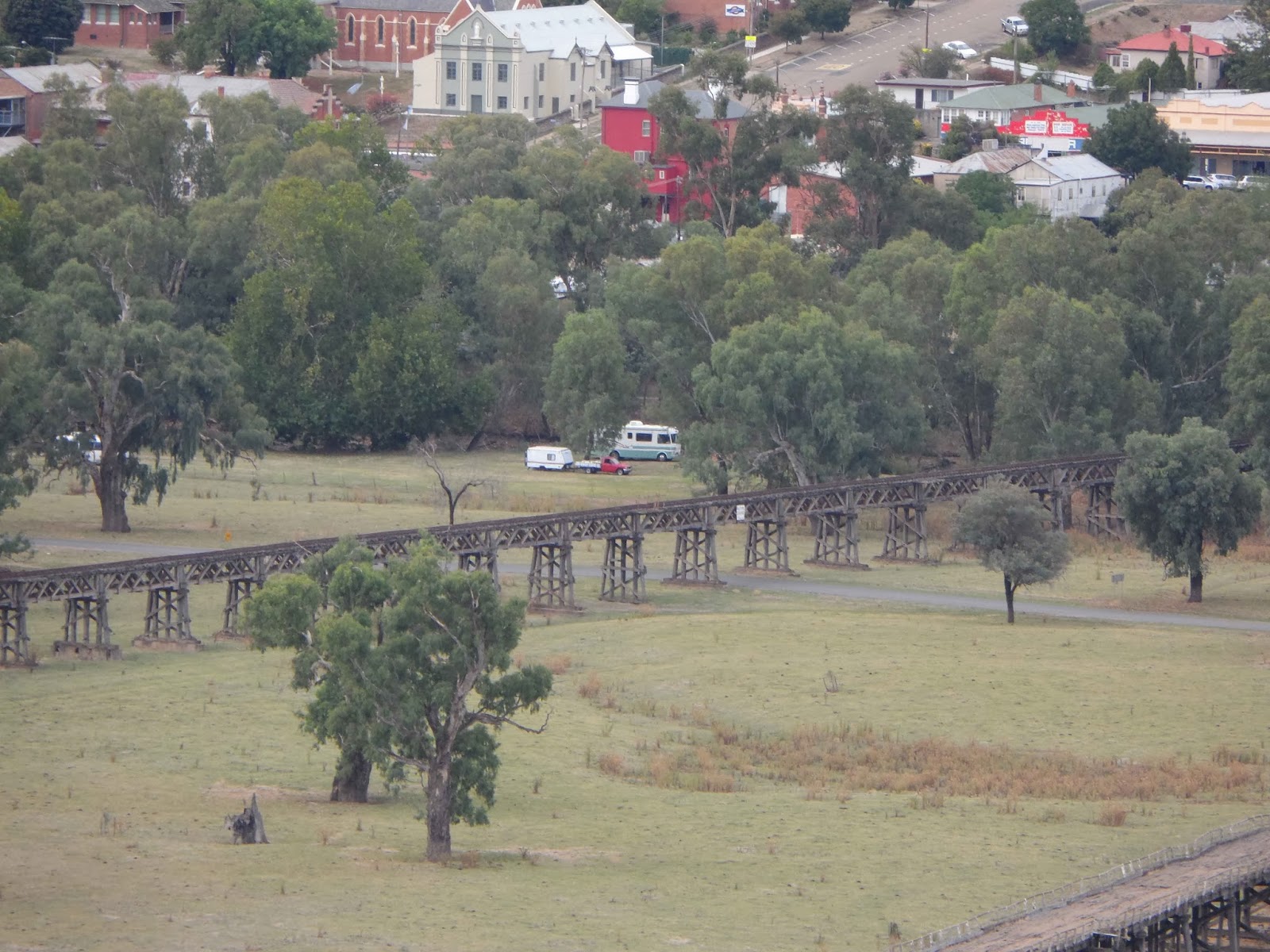 On a whim I headed to Gundagai instead of going south and camped just near the main street, nice.  Walked up one lookout and rode up the other.
Posted by TimTheTourist at 7:11 AM

Stopped overnight at Binnaway, a nice camp spot close to the centre of town with power off a meter $2 for 3 hours, nice.  The day was hot so the A/C was well worth the $6.  Went on to Ponto Falls near Wellington and stayed 2 nights on the Macquarie River and used the SUP and paddled up and down the river, nice.  A night at Gooloogong before reaching Adelong.  Stopped at the Golden Gully CP and had a beer at the club then a wine after dinner at the pub. 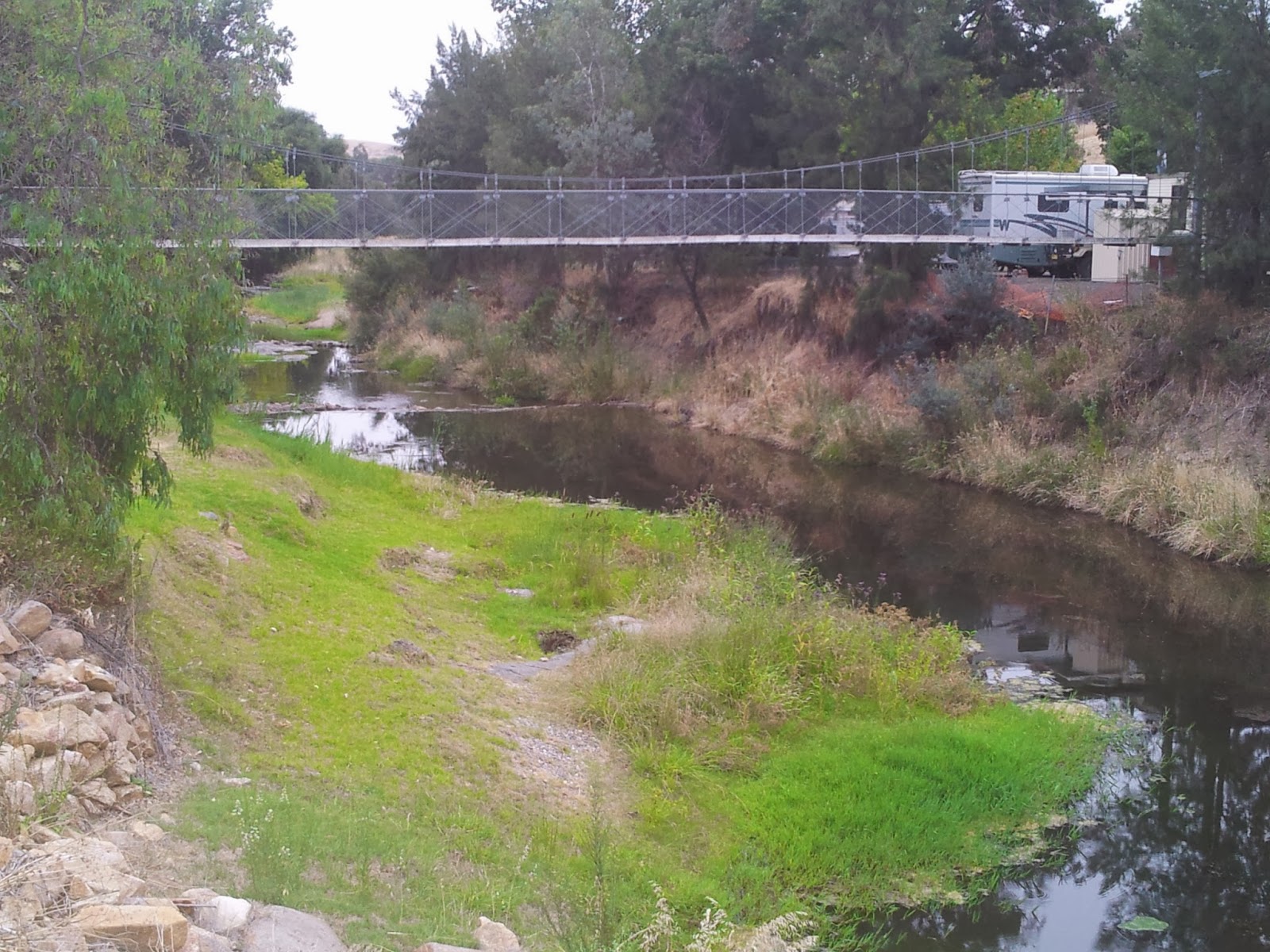 Moved up to Batlow on Friday arvo and settled into the caravan park reacquainting myself with Penny the owner.  Had a BBQ and whiskey with Brad and Kelly and walked home before the rain started.  Saturday arvo playing the horses in the pub with Brad and the locals and then Sunday up to a lookout overlooking Blowering Dam from the Batlow side.  Smoke from the Victorian fires might be causing the haze in the photo.  It rained two days then cleared up as I was leaving for Tumut. 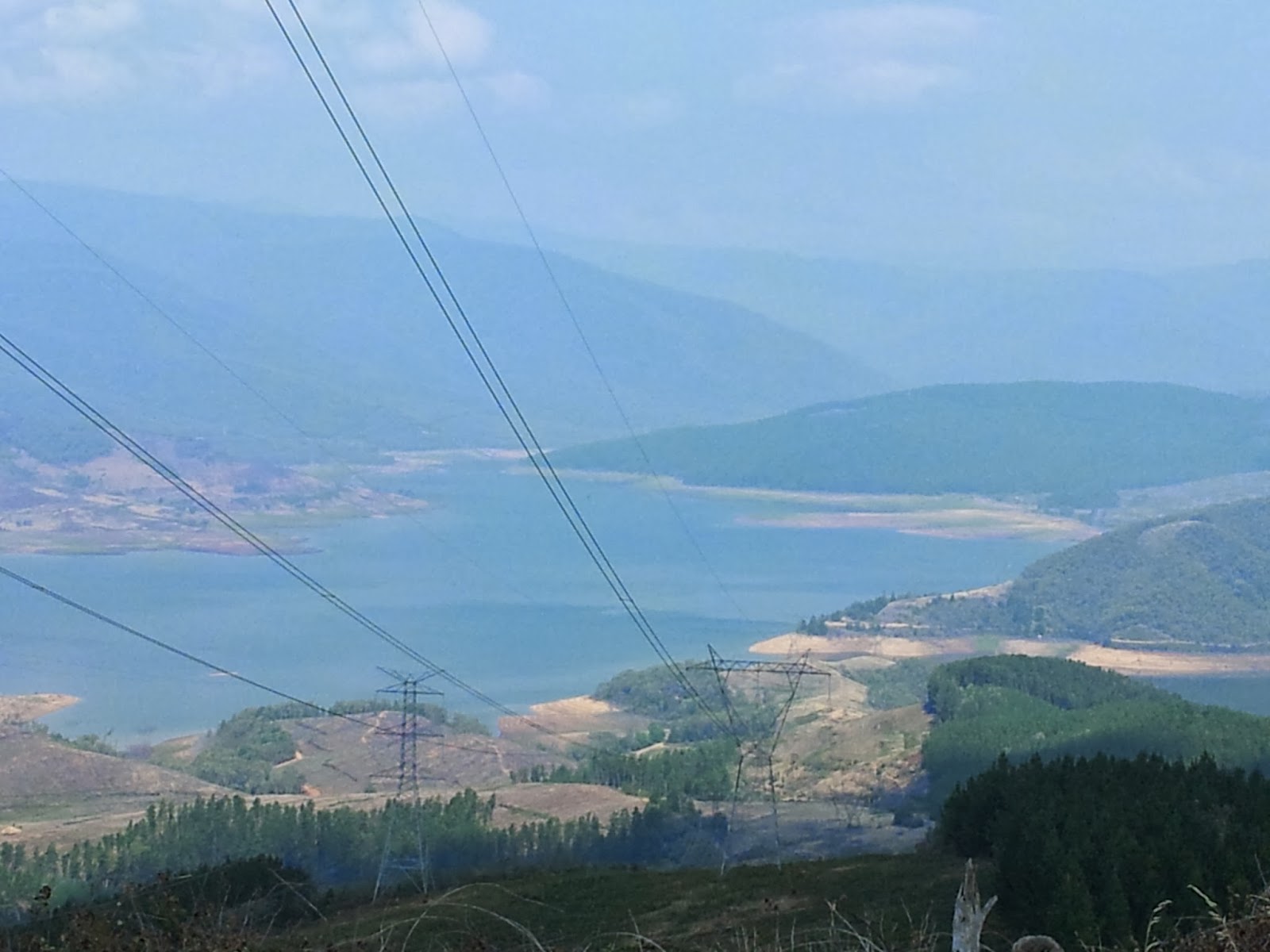 Camped at Jones Bridge on the Tumut river below Blowering Dam whilst having Dora serviced by Brad at his workshop in town.  The weather was really nice around 30 and light breeze. 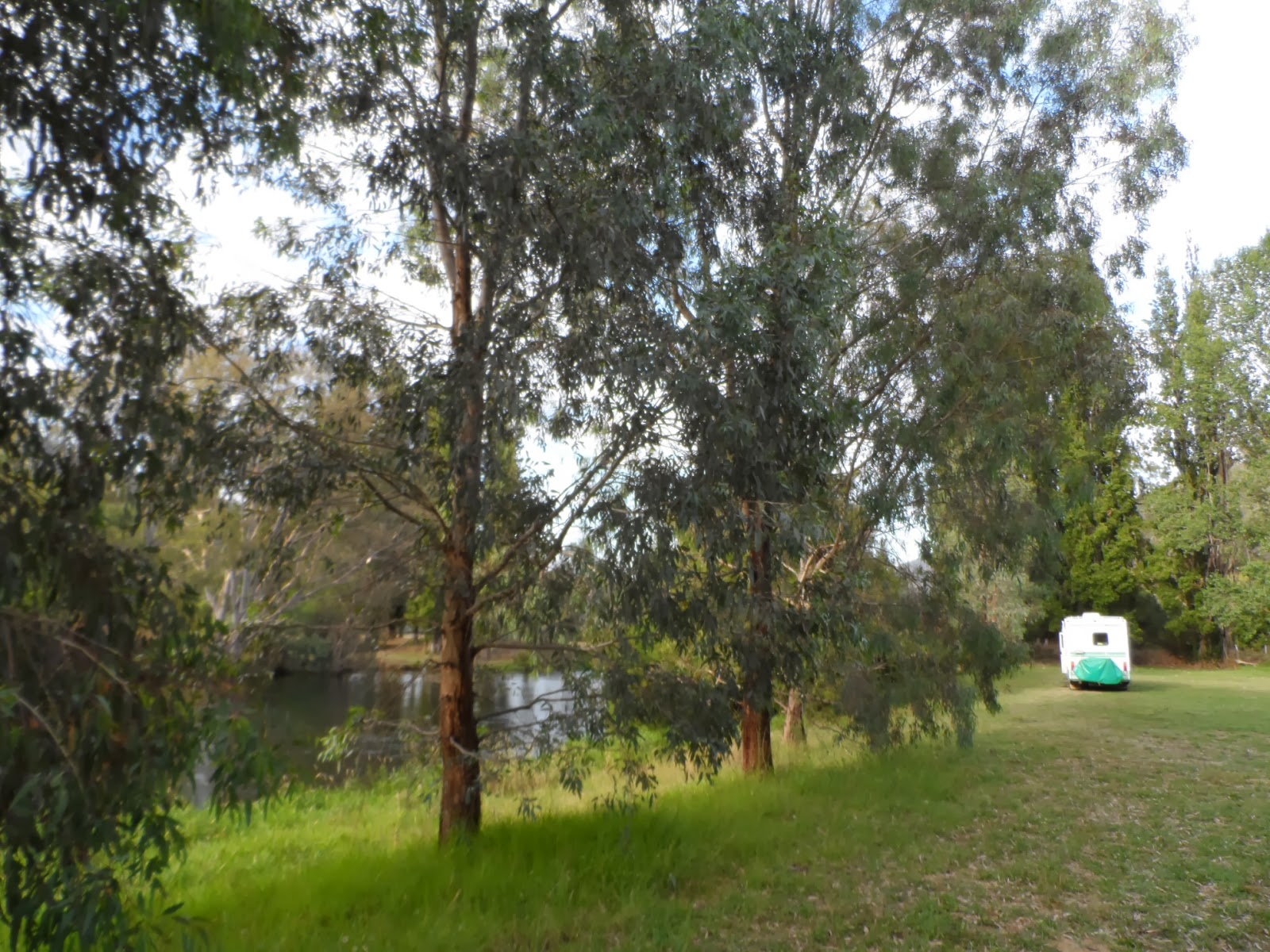 Posted by TimTheTourist at 7:37 AM

Mt Kaputar and the Oxley

Finally left the Gwydir River and Bingara and headed to Narrabri.  Stopped on the way for lunch at Mt Kaputar NP and decided to stay the night. 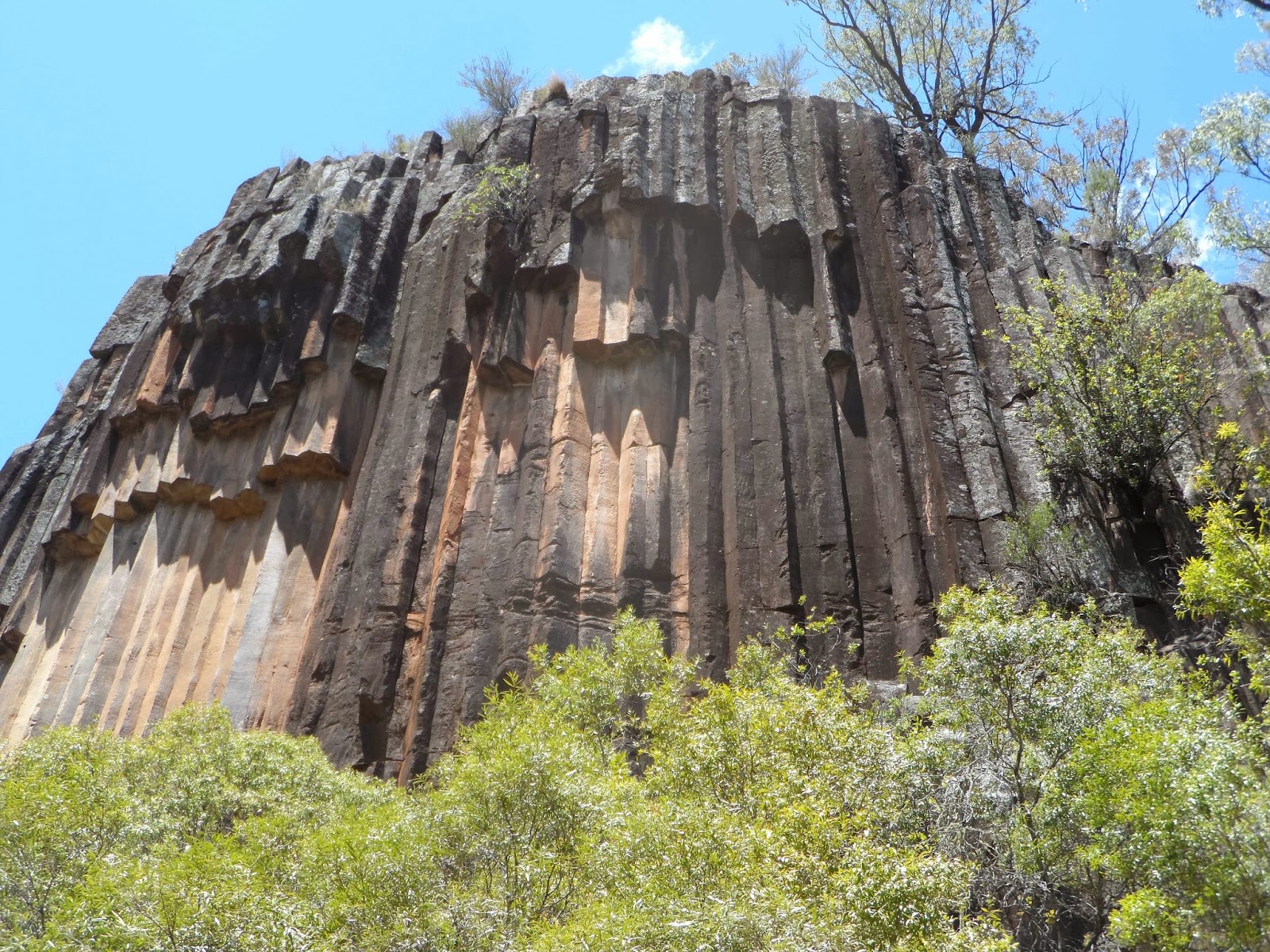 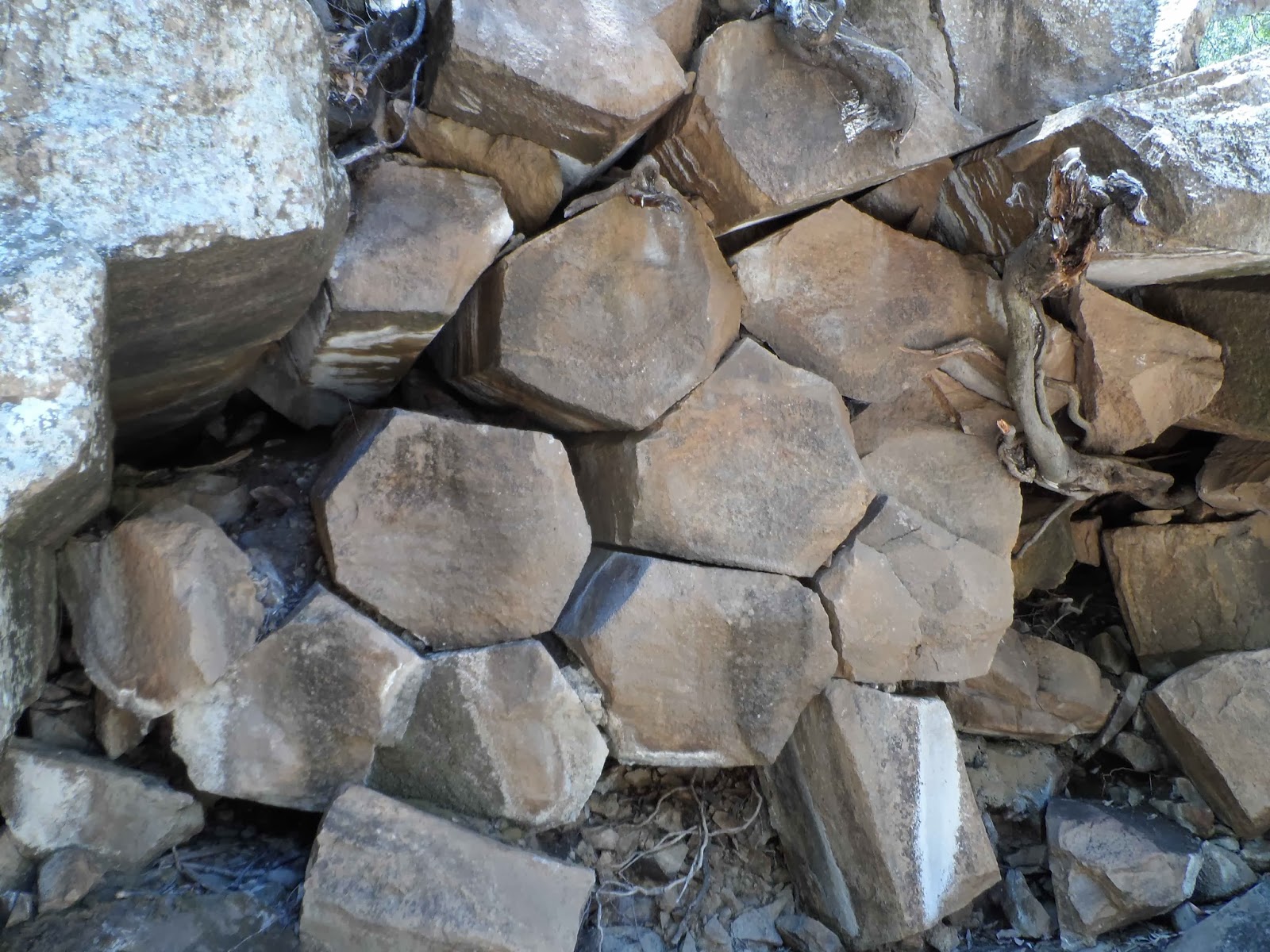 The guide book said the area was a really good example of geological organ-piping, of course it is.  On to Narrabri the next morning for provisions and fuel.  The Newell being so unattractive to me I decided Boggabri would be different, lunched there then spent the arvo in the swimming pool with all the town kids.  Not that bad actually a nice facility.  Drove on to Curlewis for a look see then decided the Oxley toward Coonabarabran was the go.  Overnighted at a rest area and had a quiet night with very little traffic.
Click on an image to enlarge 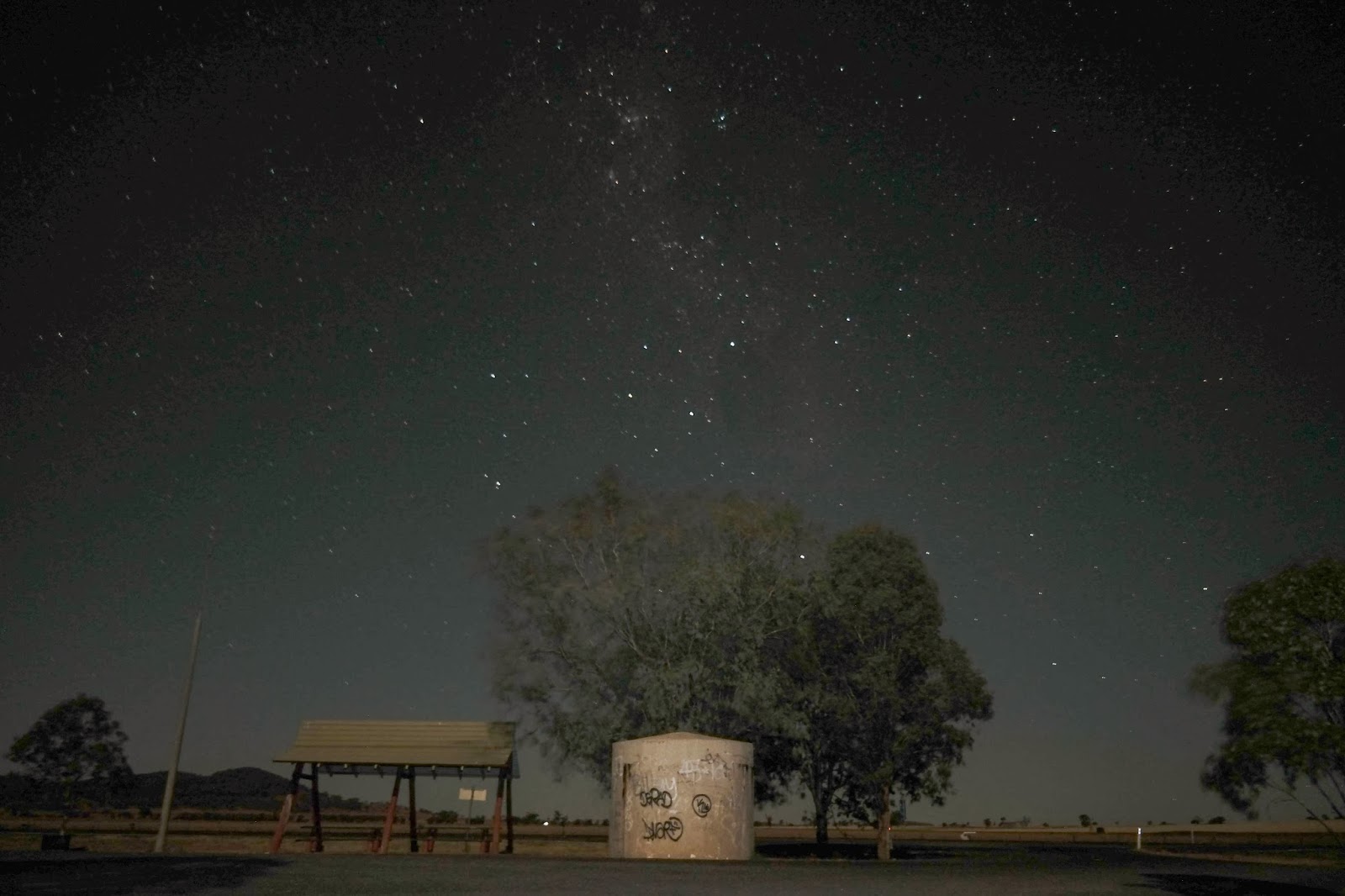 Snapped this at about 9pm on a 35 second shutter and with my torch providing extra illumination to the foreground.  Note the Southern Cross constellation above the tree.

Posted by TimTheTourist at 1:58 PM

What a great spot!  Only two or three others here for the last 3 days.  Had one end of the bank to myself.  Must be the them and us, caravans verses motorhomes.  Paddled each day up the river through one set of rapids but a bit hairy getting past the next lot another km further up.  Then float with the current, relaxing.  Paddled for an hour or more each day and several km each time.  I love the SUP! 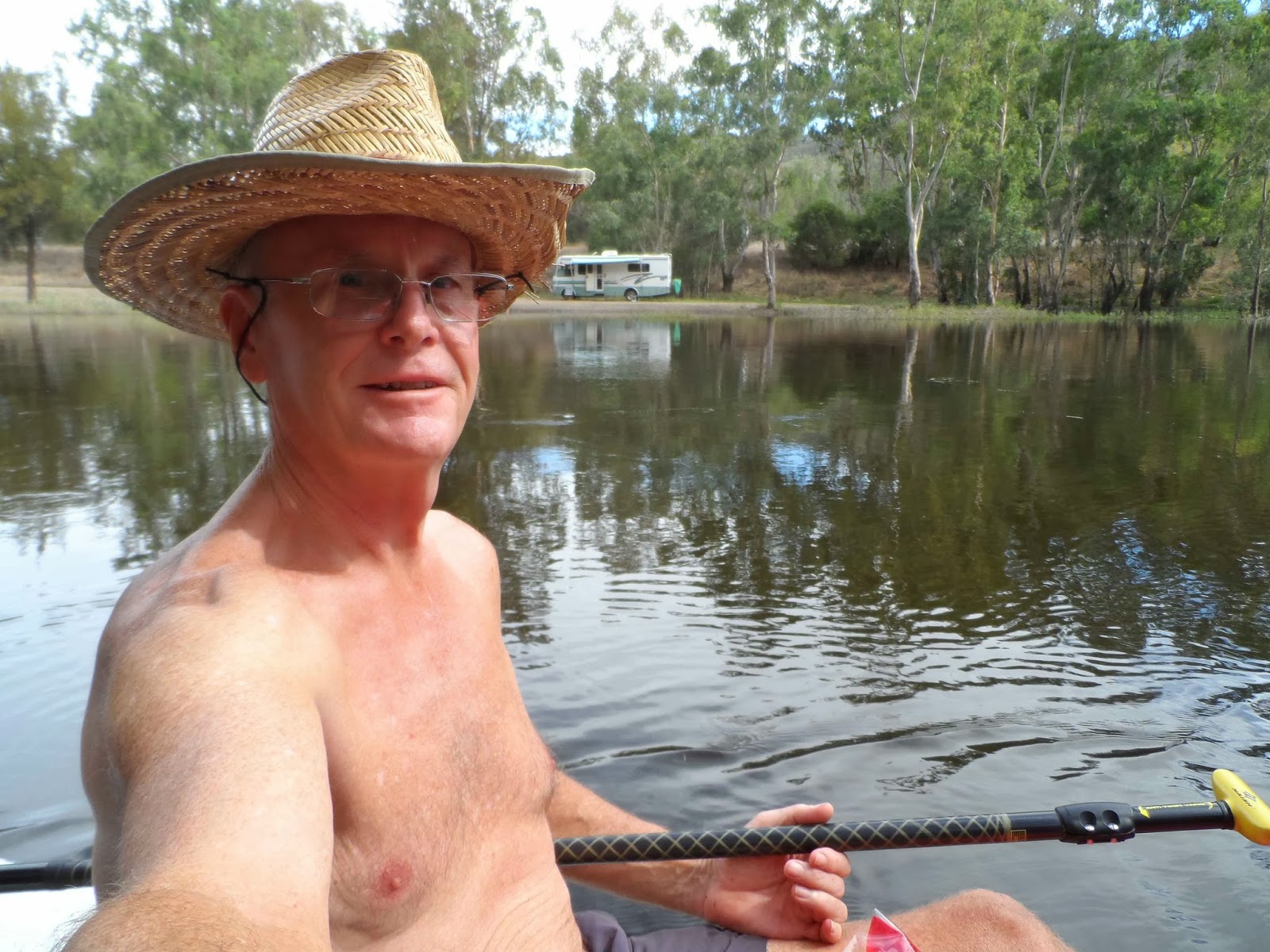 Posted by TimTheTourist at 5:08 PM

On The Road again with a new awning.

Called back to Underwood and the awning was fitted without delay or issue, nice.  Headed out the Cunningham Hwy expecting to stop at Maryvale but went on to Leslie Lake just near Warwick.  Not that good, dusty.  Next day on to Dalveen roadside stop and it was nice but cold in the morning being about 900m up.  Met a fellow motorhomer Molly heading north.  Another directional decision saw me head down from the New England Hwy to Texas where I ran into Nobby Young, last seen in Home Hill.  Next night was Yetman CP just $10/n with a free washing machine.  So I did two loads.  Tonight I'm staying on the banks of the Gwydir river near Bargara NSW, also nice. 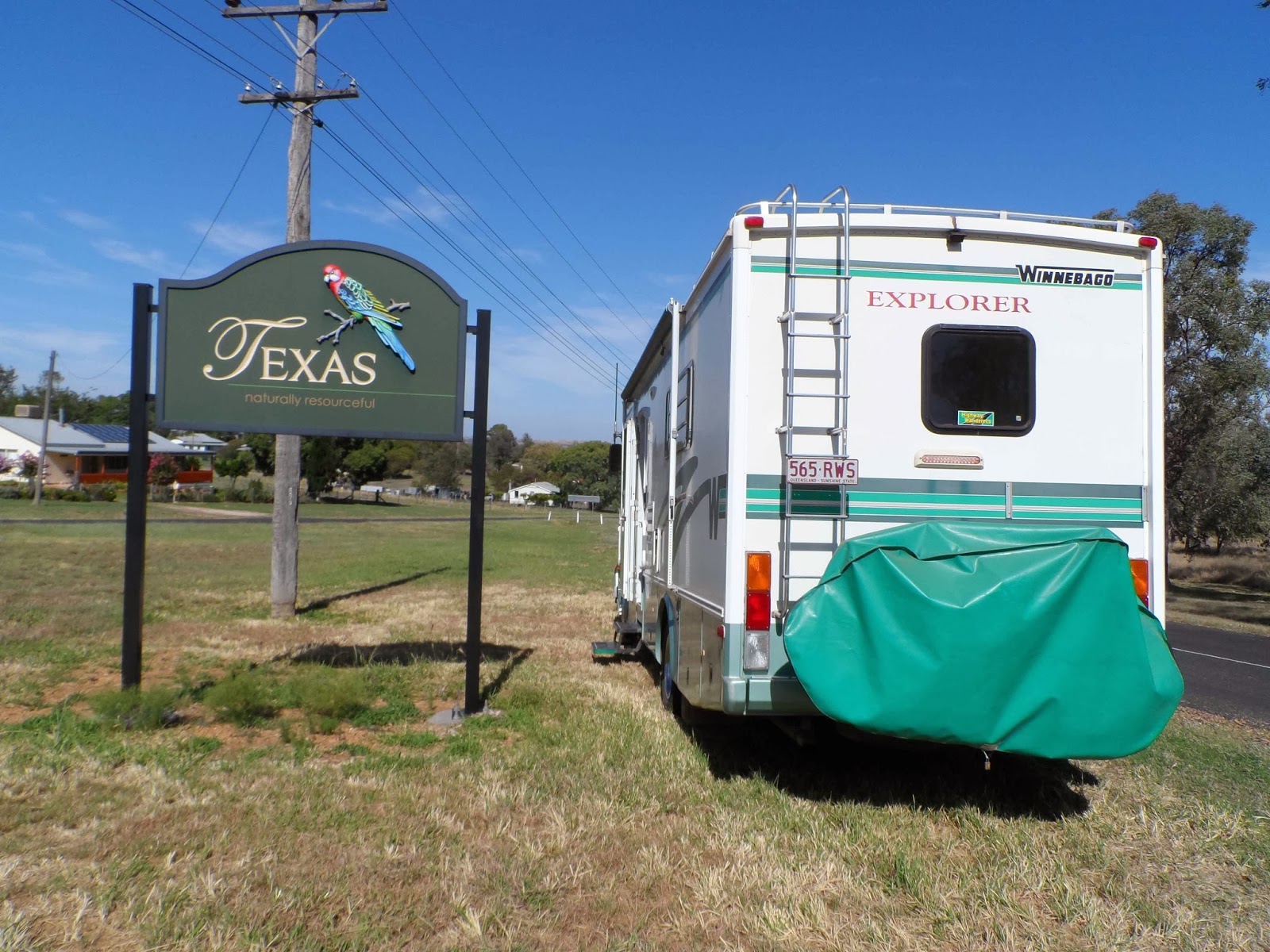 I paddled the SUP at Bonshaw weir and then stayed the night back a Texas. 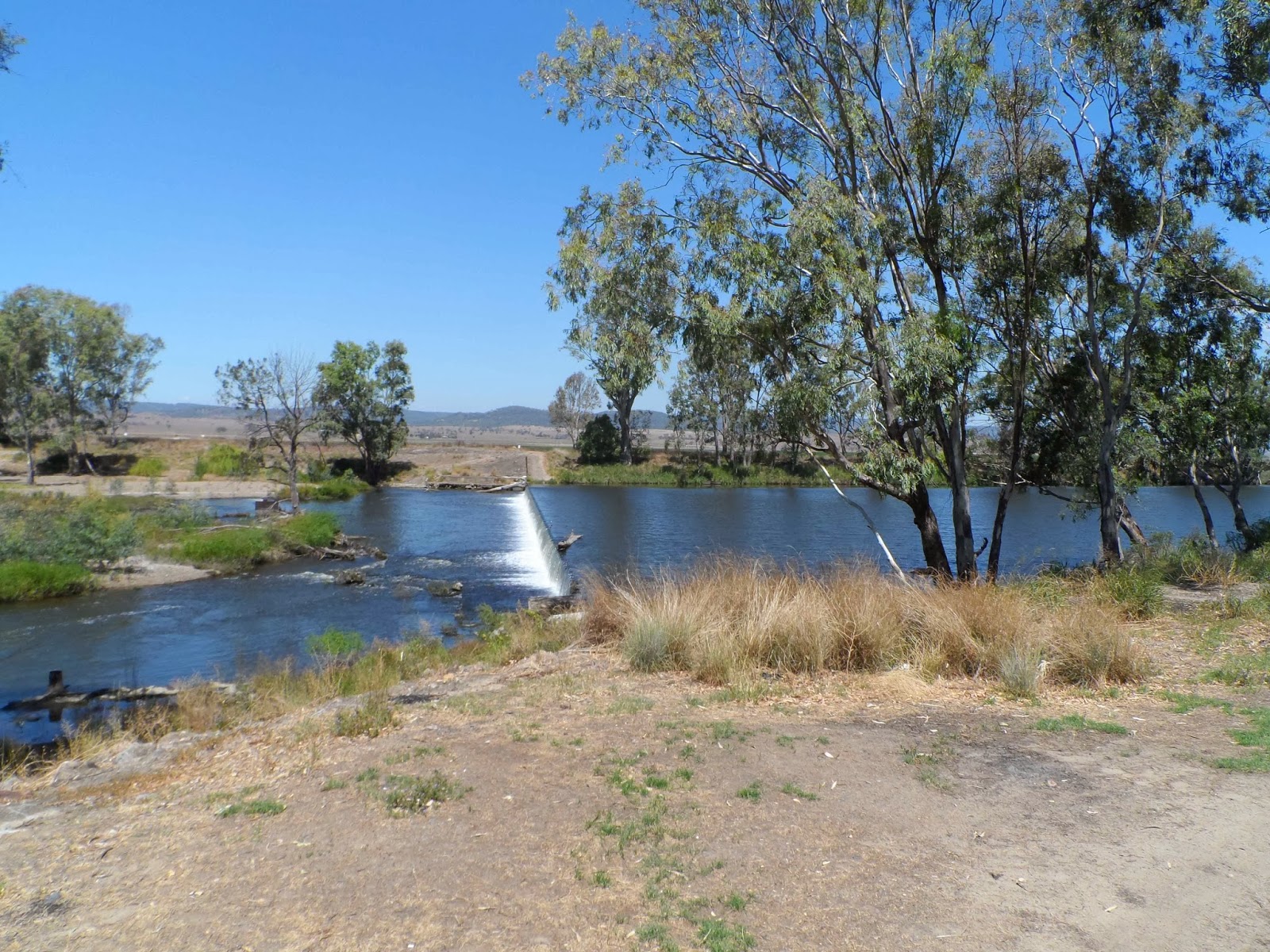 Bonshaw Weir 16km from Texas
Posted by TimTheTourist at 12:22 PM