Coolamon - Bethungra Dam.  Overcast windy cool.  Stopped at Junee for provisions and wine then on to the dam for the night. Only 100km today but that's ok a I'm delaying getting to the coast, waiting for the end of school holidays and better weather.  Walked up the hill to overlook the dam.  Stopped yet another day here waiting for the weather to improve on the coast, lots of rain.  Les called to check I was ok re the weather on the coast.

Bethungra - Shellharbour.  Still, cool, clear after a windy night. Very low on water last fill was Avoca. Stopped at Yass for coffee lunch at Marulan truck stop, 98km to go.  Booked in to ShellHarbour Beach CP for a week.  Saw Brad on the way here, just below The Pass, he was on the way up to work at Mossvale going the other way.


Whilst here I walked the beach and rode the really nice bike paths and had dinner with Brad Kelly and her parents, nice.  A bit of maintenance on the water tanks and other misc routine stuff.


Moved to Corrimal Beach CP, nice grassy out of the wind, quiet.

Decided a long ride along the coast would be good.  Rode to the station and put the bike on the train to Otford.  After 10 stations I'm starting to worry it could be too far but its just 25km south on the coast road, back home.  From the Otford station at about 1030am a steep 1.5km hill probably the worst of many to Bald Hill lookout.  Along Sea Cliff Bridge again.  Interested to see all the padlocks had been removed from the rails since last time. Then lunch at 11am Austinmer beach then on on home to Corrimal Beach CP by 1230pm.  Nice ride.

Scattered cloud still warm.  Went swimming with the boogie board then did some laundry. Read most of the day.
Click on an image to enlarge 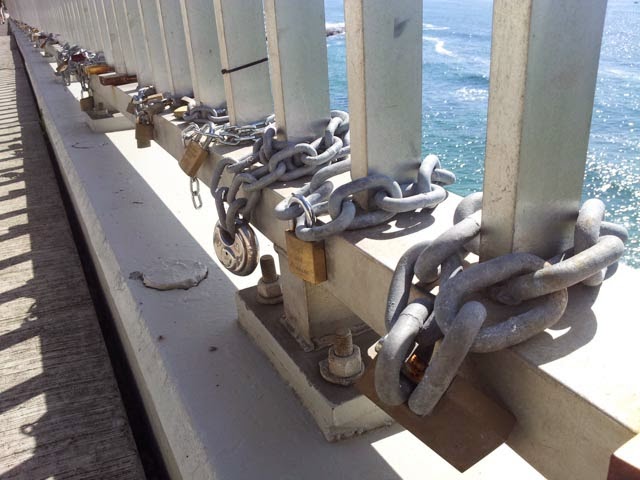 Sea Cliff Bridge when it had locks
Posted by TimTheTourist at 4:16 PM