Driving along the Bedgerabond Road, a quiet country road west of Forbes, passing farm gates and driveways looking very much the same... then Carrawobitty. What da! So out of place and time. Makes you think who built that and when? Had to stop and take a pic. Had to ask Google. Interesting history.

Posted by TimTheTourist at 8:00 AM

Jemalong Weir is west of Forbes on the Lachlan River and a good free camp for a quiet night. Well... most nights.

Heading east to Forbes on the Lachlan Valley Way are roadside Amazing Sculptures. Worth a quick stop and pic. News clipping.

Posted by TimTheTourist at 3:40 PM

Not far north along the Newell Hwy from Narrandera is Mirrool, a one pub town just off the highway. So I stop for morning smoko and take a few photos.

Lots of improvements since being here last. Like hard-stand in the free camp area as well as power available for $10/night. The pub is looking like money has been spent on it as well. Always was a great place to stop for the night.

Its too early today so maybe next time. 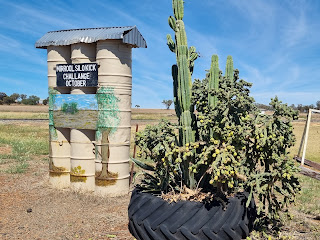 Posted by TimTheTourist at 3:54 PM

On the road again, nice.

Left Adelong and went north via Tumblong to the Hume Hwy rather than the usual and more direct Snow Mountains Hwy to the Hume. Via Tumblong is just a few km longer but is not so hilly or busy. Fuelled up in Wagga paying $1.78. Some places $1.85.

Bunnings for some stuff then provisions at North Wagga Woollies. Wilks Park for the night. Don a BA volunteer who had worked for some time at Forbes BA with me was also camped there. We talked for a while, about BA of course.

Next day onto Narrandera. Free camped at Brewery Flats on the approach to town. Its beside the Newell Highway and road noise can be an issue for the light sleeper. Before setting up for the night I drove around town rubbernecking.

Having lived in Narrandera and operated the Lake Talbot Caravan Park I was keen to see what had changed since we left, finishing up after 7 years in 2010. Back then a large number of very large London Plain trees were at the end of their life span. Never a horticulturist I agonized about what species and what was the appropriate size to plant. Trees are not cheap and we needed about 20. It appears it all worked out for the best as this photo of some of the trees shows. They were once just saplings.

Posted by TimTheTourist at 5:03 PM

Had to remind myself what's happened since last posting.

Early in February coming from Gundagui back to Adelong for a week or so. Then Forbes for a week and then back to Adelong for two weeks. Now ticking over to March, home (Cotton Tree Qld) is in my thoughts. Lots of things have happened up north, not just the weather. Destination Fixation can be an issue so taking a convoluted course could help.

One fav past time is studying maps and plotting which roads and what places to see along the way. The Newell is not one of my favourite highways and its been a few years since the MH has been that way. It's the best option for bypassing Sydney, Brisbane and the current intense coastal weather.

First up Wagga for some retail therapy and provisions. Then Narrandera catching up with friends. Then The Newell.

Posted by TimTheTourist at 3:02 PM