Maroochydore to Narrandera and another year.

Maroochy Primary School -Texas
Boxing Day looking to get to Narrandera before next year.  Left at 6am stopped a couple of times for coffee or lunch then for the day at Texas, Les Myers Res, about 450 km that's enough.  Camped by the river. Nice facilities, bbqs, water tank, shelter and well kept grass.

Texas - Hickey Falls
Clear sky light breeze, cool. Nice to sleep where its not humid and the air is crisp. Drove to Warialda and refueled. Stopped at Bingara for coffee and Narrabri for lunch. Bingara is a really nice looking historic town, interesting to walk around. Stopped after about 430km at Hickey Falls rest area before Tooraweenah.

Hickey Falls - Mirrool
Started the day with a 3km walk before heading off. Breakfast at a rest stop then lunch and shopping at Forbes. Provisioning at woollies before heading off. Stopped for fuel at West Wyalong and made Mirrool by 3pm.  Damn the pub is shut today!

Mirrool Hotel - Narrandera
Clear sky, still, crisp.  Started the day with a short walk around town, up and down every street 1.2km.
Arrived at Narrandera about 9am did some provisioning then home. Spent most of the day mowing grass then went for a swim in the channel to clean off and cool down.

Narrandera
Clear sky, still, crisp. Had to put on track pants, it was cold, nice. Finished the mowing had lunch and headed down the lake. Had a ski, skip started from the bank first time, had drinks on the balcony with Shane, Doug, and the two Debs before heading home to fish with Brad, Kelly and the Birch family, nice day in all.  New Years Eve.  Did Dora's 8000km at 145523 oil, filter, & lube.  Rode into town and the lake then spent the rest of the day around the block.  In bed by 11pm. Missed the fireworks again!

Posted by TimTheTourist at 8:38 AM

October
Booked into Cotton Tree CP will be here till Christmas.
Motorhome safety check, passed and re registered for another year.
Lots of bike riding like to Mudjimba beach and around 45km.
Quarterly BGL HbA1c tests all good.
Looked to purchase a unit at Waterfront Place

December
December 15th had to move out of Cotton Tree CP as its booked out but thats OK as $500/w is more than I'm prepared to pay.  Move up to the Maroochy Primary School with some other CMCA members, $10/n now thats more like it.
Rose and Tony Jaspers here on holiday for a week.
19th December took ownership of Waterfront Place unit (with tenant)

Christmas Day on the balcony at Mary's place with her youngest Michael, nice.
Boxing Day Off early heading south. 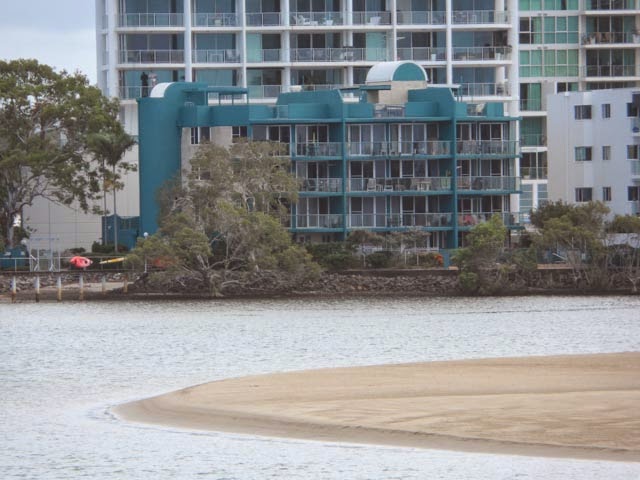 Waterfront Place
Posted by TimTheTourist at 7:19 AM