Corrimal to Monto and Blaze Aid

Got a call from the Highway Wanderers Motorhome club, El Pres Dave, asking to help out at Monto with flood damage from all the rain in the region in the last couple of weeks. Sounds like a worthwhile thing to do. About 1300km to Monto, better get started.

Corrimal. Had a good run through Sydney even though it was drizzling most of the time, then stopped for lunch at Mooney Mooney still drizzle. Refuelled at Gosford and stayed overnight in a rest area at Cessnock stopped drizzling but still overcast.

Showers overnight clearing in the morning. Headed off at 8am via Broke Rd, the very worst sealed rode I have driven on and in such a rich area! The Hunter Valley. Stopped at Muswellbrook for breakfast and Vinnie's for work clothes. Stop for lunch at Tamworth and found another Vinnie's and got a shirt this time. On to Armadale and Dumaresq Dam, nice.

Hot shower breakie and headed off at 8am. Cold outside. Stopped at Glen Innes for a cuppa and fuel. Tenterfield at 1230pm for lunch. Lost an hour crossing the border to QLD. Stopped for the night at Dalveen a small community just into QLD, nice. Quiet camp considering the numbers here, mostly backpackers in wiz bangers. Coffee at Hampton then lunch at Cooyar. Nice spot but no internet or phone, can't have that! Drove on to Ban Ban Springs for the night, nice, actual spring water coming out the ground and talked to a local who drinks it and swears by it.

Stopped for coffee and a walk in Gayndah, a lot of water passed this way recently. Mulgildie for lunch, just short of Monto. Arrived at the Blaze aid camp about 12:30. Got fitted out with all the gear, pants, shirt and gloves. BBQ dinner tonight then off to work tomorrow clearing fences. Met Col the caretaker at the showgrounds, nice old bloke. The spring at Ban Ban Springs 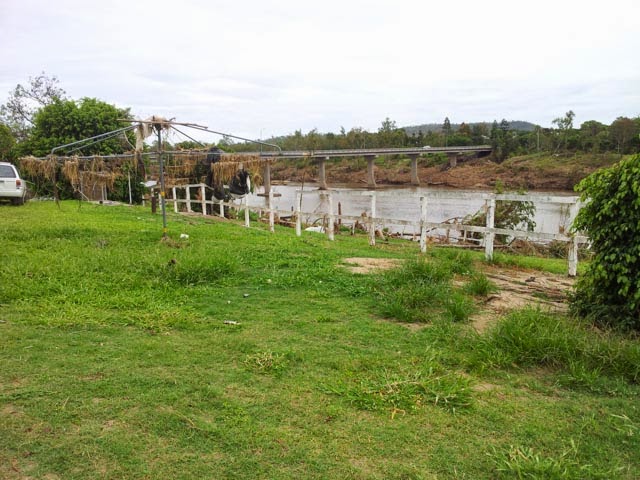 Gayndah behind the pub in the main street

Posted by TimTheTourist at 7:48 AM